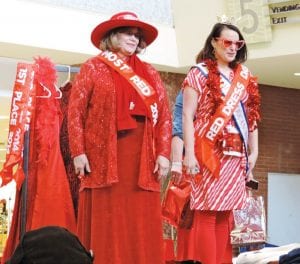 And the winners are these two ladies (left) who won for best red dress and wearing the most red. First, second and third place ribbons were also awarded. Above, Zumba instructors were on hand to warm up the crowd.

FLINT TWP. — Several women wearing red dresses (and a few men too) kicked up their heels on Feb.8 for a quick outdoor run around a tenthof a-mile parking lot course laid out for the second annual “Go Red for Women Red Dress Dash.”

It was held at Genesee Valley Center shopping mall and sponsored by the American Heart Association and Macy’s department store.

The pre-Valentine’s event was designed to raise awareness about heart disease as the leading cause of death for women, said Jennifer Gracey, corporate event director for the American Heart Association.

“There is no Red for Women Conference in Genesee County so we are trying to come up with a new and exciting event that will bring more awareness … and hopefully save some lives,” she said.

The Dash was a non-competitive outdoor fun run on a short track in the parking lot between Macy’s and Barnes & Noble bookstore. 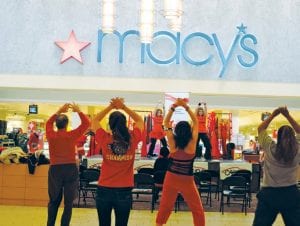 “It is about getting people down here to have a good time and find out where they go to get the resources and tools that they need to live a healthier life,’’ Gracey said.

Prizes also were awarded to the Dash participant wearing the best red dress, the most red and a celebrity participant.

Agents were on hand to provide more information about heart disease. A Zumba demonstration got the group warmed up and hearts pumping.

A representative from McLaren Medical Center took the stage with a Little Anne CPR training manikin and Jennifer Klein of Owosso, a congenital heart disease survivor, spoke about her life-saving surgeries and introduced her young son.

Last year’s Dash was held in downtown Flint but not well attended because of a blizzard, Gracey said. The event was moved to the mall with more sponsors and the goal of attracting a larger crowd. 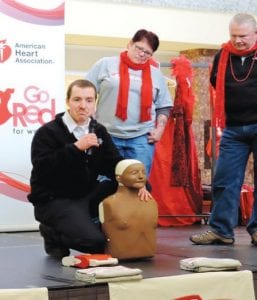 A representative from McLaren Medical Center demonstrated CPR techniques on a mannequin.