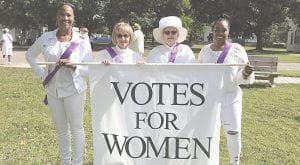 GENESEE TWP. — History came to life at Crossroads Village on Aug. 31, when the Genesee County Women’s Vote Centennial Committee celebrated the 99th anniversary of the signing of the 19th Amendment.—which granted women the right to vote.—with a reenactment of the Women’s Suffrage Movement. The four-hour event included speeches, dramatizations, and reenactments of the movement, as well as a march down main street.

Participating women dressed in all white as a sign of homage for those who fought in the movement and carried signs and banners. Some orators replicated historic speeches, while others spoke about the effects the movement had then and even now.

The event concluded with a mock vote at Crossroads’ Clayton Township Hall building, where voters could cast their ballot to ratify the 19th Amendment. The day not only remembered those who fought for women to have the right to vote nearly 100 years ago—and the many challenges and difficulties they overcame— but also encouraged those in attendance to embrace their right to vote.

Members of the Committee also helped to spread the word that voting laws have changed after Michigan Proposal 18-3 passed in 2018.

Now, citizens who are qualified to vote can register online up to and including Election Day, obtain a no reason absentee ballot, be automatically registered to vote when obtaining, updating, or renewing a state ID or driver’s license, and vote straight-ticket in a partisan general election. The many groups involved in the coalition make up a committee dedicated to supporting women, and work to make events such as this one possible throughout the year.

Members of groups interested in joining the coalition should contact Pegge Adams at fsjus5@yahoo.com for further information. For complete and up-to-date voter’s information, please visit the Michigan Voter Information Center website at www.michigan.gov/vote.