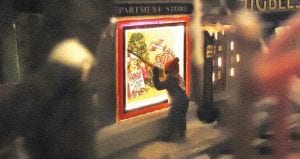 Ralphie from the movie “A Christmas Story” looking in Higbees at the Red Rider Carbine.

SWARTZ CREEK — Child at heart, Gerald Roberts, has done what few rarely get to do, return to their childhood and have a spouse who lets him.

The Roberts’ have only been married seven years, but between them both, they have enough Christmas village collectibles to divide into townships.

“I’ve always been interested in trains as a kid,” Roberts said. “When I was 12 years old, Lionel trains had a father/son railroad.” This began a tradition for a few years for Roberts and his father, and he would receive a couple train cars each year that they would set up on a table downstairs.

“I was in awe,” said Roberts about the wish book at Sears. He said he would mow lawns for a quarter and wash cars to save up enough to take the bus to Loomis in Downtown Flint to purchase additional cars.

“The car I wanted was a work tender caboose,” Roberts said. “So I ended up buying it, and it was my favorite car.” 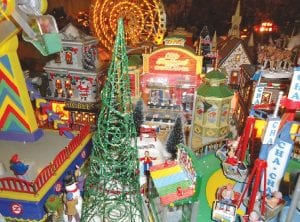 Just a glimpse at Gerald Roberts’ Christmas Village at his home in Swartz Creek.

Unfortunately, like most teenagers, hindsight doesn’t exist until later in life. The train set wouldn’t get him physically where he wanted to go, lacked the speed and luster of having his own wheels, so the set was sacrificed.

“I sold the train set for $125 for a down payment on my car that cost $550,” recalled Roberts. “All these years I wanted to get my train set back. I found that car I treasured most at a flea market in Pentwater, MI. I paid $30, even though it was used,” he laughed.

He had three train sets in the living room, three circles, one inside the other that his wife “put up with,” until his daughter put it to him straight and said, “Dad, the train has got to go.”

Now between Roberts and his current wife, they have more than 200 houses; Catholic, Presbyterian, and Orthodox churches; mountains; wilderness with more than 100 pine trees; cities; harbors; and ski hills. Much of their collection is animated too.

“I got five switches that turn on all this stuff,” he said.

The only thing more tiresome than dusting would be to pack it away until next year, so it remains a permanent dining room attraction for guests and grandkids alike.