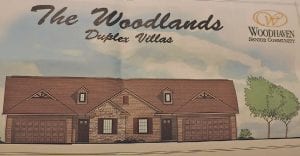 The township Planning Commission approved site plans last week for a two-phase building project. Phase One will see construction of a 9,996 squarefoot clubhouse/wellness center and one prototype duplex villa. Phase two will add 11 additional villa duplexes plus grounds improvements such as a walking path.

The wellness center clubhouse will include a banquet hall, card rooms, a warming kitchen, a massage room, conference room and executive offices. The two-bedroom duplex villas will have two-car attached garages and a master bath, two things residents have asked for, said David Dixner, Woodhaven owner and site manager, in his plan presentation.

The 40-acre Woodhaven property is zoned multi-family residential. The new development would occupy about nine of 17 vacant acres.

A group from neighboring Valley Oak Condominiums voiced concerns about decimation of woodlands. The group had met previously with Dixner to discuss too many trees being removed and were displeased about not getting a chance to speak at the site plan review. Valley Oaks is located south of Woodhaven with about seven acres of woods between them. Patsy Lou Williamson dealership borders the east side of the Woodhaven property and a commercial strip including a Kroger store borders the north.

Dixner said he had a significant reason for thinning out the woods. One was removal of dead ash trees. Another was to approve visibility. There have been problems with trespassing and illegal hunting in the dense woods, he said. Also during the tree thinning, they found a small tent village about 50 to 75 feet from the Valley Oaks property line, he said. Drug paraphernalia was strewn about the four or five secluded tents.

“You can see into that area now so that type of activity can no longer take place,’’ he said.

He added there are no current plans for development of the southern portion of his property.

“We want to be good neighbors,’’ he said.

A Valley Oaks spokesperson said that some residents paid a premium price to have sites close to the woods and wildlife. A letter presented to the commission also said they had worked to have the area declared as protected wetlands. Michael R. Pifer of Kraft Engineering in Flint, which is overseeing the Woodhaven expansion, said they checked with the state Department of Environmental Quality and were told the area was not a regulated wetlands. Dixner said he could not think of a better way to celebrate Woodhaven’s 25th anniversary, than to announce the expansion. He said 18 interested residents have paid deposits for one of the 24 new units and he hopes to break ground by August.