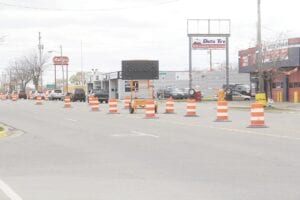 BURTON — Work is underway currently to resurface Saginaw Street in Burton, leading up to a major reconstruction project with the Michigan Department of Transportation for Grand Traverse Boulevard.

“Saginaw Street construction is well underway and moving forward,” said Haskins. “Hopefully we’ll be moving ahead with Grand Traverse next and getting that one accomplished.”

“What we’re requesting is the mayor and clerk still execute contracts, per our charter, but Amber is set up for the day-to-day stuff to keep things moving,” said Abbey. “She is our person assigned to road projects and she’s already set up to DocuSign through the state of Michigan to sign the documents on the project as it moves forward, the weekly and daily things, it slows the processes down if we have to stop and have the mayor do those things.”

He clarified that day-to-day things would mostly be pay sheets and similar documents, with any contracts still require the mayor or clerk to sign.

“Grand Traverse is on schedule other than that. It’s a very aggressive schedule to build Grand Traverse out, so it would be helpful,” said Abbey. “The main documents, entering into a contract, will always be signed by the mayor and clerk.”

Vice President Greg Fenner, who also chairs the Burton Downtown Development Authority, said with the ongoing paving of Saginaw Street, it might be time to consider a recent DDA road study which suggests setting a uniform speed limit down Saginaw of 40 MPH.

“It’s 45 MPH now in one section ,35 MPH in another,” said Fenner. “It’s time to consider a uniform speed. It will be slower for some, faster for some, but it’s something we should consider while this construction program going on.”

Council President Steve Heffner suggested placing the study on the next meeting agenda in May, to which Fenner and the rest of the council agreed.