Work underway on I-75 ramps to eastbound I-69 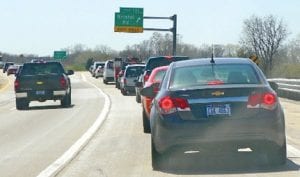 On the first day of the I-69 ramp closures off I-75, eastbound motorists being detoured west to Bristol Road were spending as long as 15 minutes waiting to exit.

FLINT TWP. — Depending on the time of day, motorists trying to reach eastbound I-69 via I-75 north or south should expect to encounter traffic backups on the detour.

That was the case on May 1. the first day that ramps from I-75 to eastbound I- 69 were shut down for construction work.

All eastbound traffic is now being rerouted to westbound I-69 where drivers can exit at Bristol Road, turn left at the light, then access the eastbound I-69 entrance ramp.

Traffic can get backed up as drivers exiting at Bristol Road wait for the green traffic light before turning left to reenter the freeway.

Once on eastbound I-69, drivers may find only one lane open as they approach the interchange area at I-75 and I-69 where construction crews are at work day and night.

The Michigan Department of Transportation (MDOT) has announced a $1 million investment to make improvements to the I-75 ramps to eastbound I-69.

The work is expected to be completed by mid-June. Required nighttime lane closures will be announced as scheduled