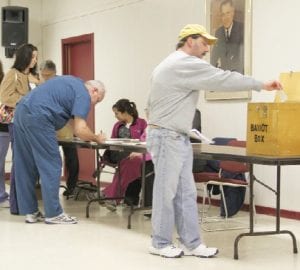 Technical workers line up to place their vote in regards to the new contract. The contract was ratified with 90 percent of the 196 members that voted agreeing to the four year contract deal.

GRAND BLANC
— A strike was averted as technical workers at Genesys Regional Medical Center voted in favor of a new contract offer on Oct. 14.

By 5 p.m. the votes of nearly twothirds of the 280 technical workers at Genesys were in and counted with 181 of them voting in favor of accepting the new contract and only 15 voting against it. The ratification resulted in the ninemonth long battle between GRMC and Teamsters Local 332 being put to rest.

“This same outcome could have been achieved in March if they would have just sat down with us, but they were more interested in busting up the union and it took us all these months to show them that that would not happen,” Teamsters President Nina Bugbee said. “So I fell a real good sense of accomplishment. Ninety percent of those that voted are pleased, and that makes me very happy.”

The new contract, which the Union was recommending their members ratify, will allow employees aged 45 and older with at least 15 years of service to stay in the defined benefit pension plan in exchange for their longevity pay. Other employees that do not meet those standards will be switched to a defined contribution plan where Genesys will contribute 3 percent of wages. In turn, those employees that need to switch pension plans will be able to keep their longevity pay, which will differ depending on whether they have 10, 15 or 20 years of service to the company.

In terms of wages, step increases will be cut by 50 percent with the average percentage increase equaling out to be about 4.1 percent among the employees, and employees will still be able to receive their additional 2 percent-a-year wage increase. Also under the new contract, employees will switch health care providers to Central States, Southeast and Southwest Areas Health and Welfare which offers a package that Bugbee said is “comparable” to their current plan.

The Genesys Emergency Transport Services (GETS) employee positions were still eliminated as Bugbee said they could not stop Genesys from closing parts of its operation. However, GETS workers that we able to be bumped to a new position, could do so with no pay or benefit loss or they could accept a severance package.

In total, Genesys will be saving $6 million under the new contract, down from the nearly $11 million they hoped to save when they gave their “last, best and final” contract offer in June.

“Genesys is pleased with the outcomes of the new contract,” Tammy Saunaitis, Genesys Health System vice president of Human Resources, said in a statement. “We achieved necessary operational and economic objectives to help sustain the long-term vitality of Genesys, while reaching a fair agreement that recognizes the contributions and diverse needs of our technical employees.

“We want to express our appreciation to the Genesys and Teamsters bargaining teams for working diligently to reach this agreement.”

Although both teams can breathe a sigh of relief right now, Bugbee said a new labor dispute could be on the horizon.

In just 18 months contracts for the 1,000 Registered Nurses at Genesys will expire, and the Teamsters and Genesys will once again meet to try and reach an agreement.

“We still have got a big job in front of us that has us fighting against Genesys and their anti-worker, antiunion busting tactics,” Bugbee said.