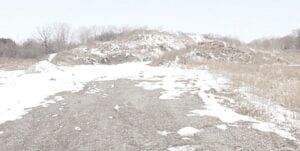 The dirt mound (shown last winter) located off Gale Road next to the Davison Dog Park is what was excavated from the site of Lake Callis when it was built six years ago. File photo

DAVISON TWP. — Crews began removing a pile of dirt and clay excavated from what is now Lake Callis almost two weeks ago, with approximately 70,000 cubic yards of dirt and clay heading to the Richfield Landfill where it will be used to create a cap.

As for what happens to the remaining 280,000 cubic yards of dirt and clay, township Supervisor Tim Elkins said he has a three-year plan to work with an excavation company to completely remove it and restore the property on the west side of Gale Road, south of the railroad tracks, to its original condition.

“They’ll be working 30-40 days,” said Elkins, referring to the current project. Overall, it’s going to be a 3-year project. We’ve been in talks with another company for nine months and they want to work with us on projects they have in the next couple years.”

The contractor would remove the rest of the dirt and clay for these upcoming projects at a minimal cost to the township.

Once the dirt and clay is fully removed, Elkins said the township would restore the field, located next to the Davison Dog Park, back to its natural grade level. Then, he said he hopes to work with farmers to plant flowers potentially – perhaps making it a field of sunflowers.

Elkins said the township was able to get a three-year soil erosion permit from Genesee County, so they don’t have to go back annually to request another permit.

It involves the state spending $850,000 in grant money to move a portion of the dirt mound to the Richfield Landfill, 11145 E. Mt. Morris Rd., and use it to cap the landfill.

Elkins said once the dirt is gone, the township has budgeted $35,000 for the clean-up plans.