World-renowned clarinetist to perform with FSO 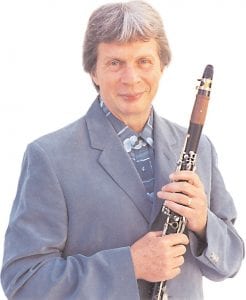 FLINT
— The Flint Symphony Orchestra (FSO) continues its season, From the Eternal City, 8 p.m. Nov. 13 at The Whiting, 1241 E. Kearsley St., as the orchestra, led by Maestro Enrique Diemecke, will perform several works from composers such as Berlioz, Corigliano, Gounod and Ibert.

John Corigliano’s “Clarinet Concerto,” features soloist Richard Stoltzman, and is hailed as a standout, complex concerto composed by John Corigliano that can only be performed by musician of immeasurable talent. This contemporary composition is replete with subtle nuances and contrasting accompaniment that achieves sense of wonder. Along with the concerto, other works to be performed include Hector Berlioz’s “Roman Carnival Overture,” Charles Gounod’s “Symphony No. 1 in D major” and Jacques Ibert’s “Escales (Ports of Call).”

Award winning clarinetist, possesses a virtuosity, technique, imagination and communicative power that has revolutionized the world of clarinet playing, opening up possibilities for the instrument that no one could have

predicted. He was responsible for bringing the clarinet to the forefront as a solo instrument, and is still one of the world’s foremost clarinetists. He has worked as a soloist with more than a hundred orchestras, including the New York Philharmonic, the Pittsburgh Symphony, the orchestras of Atlanta and Louisville and overseas with orchestras in Britain, Italy, Germany, Hong Kong, Japan and Austria. He is also a celebrated recitalist and chamber music performer, as well as an innovative jazz artist and exclusive RCA recording artist. Stoltzman is noted for his double lip embouchure, wide vibrato and ability to mimic the sound of a human voice on his clarinet. He combines traditional and contemporary classical and jazz material with his own unorthodox style and the result is a constant forging of new musical territory.

Born in Omaha, Nebraska, Stoltzman was influenced early on by his father’s interest in big band music. He began studying the clarinet at the age of eight and learning the jazz technique of improvisation in junior high school. Benny Goodman was his earliest musical mentor and remained a strong influence throughout his career. Stoltzman received a master’s degree in music from Yale University. He then began work on a doctorate at Teachers College of Columbia University. He auditioned for and was accepted at the Marlboro Music Festival, where he stayed for ten years, providing him the opportunity to study with world-class figures such as Harold Wright, Rudolf Serkin, Marcel Moyse and Pablo Casals. He later joined the California Institute of Arts where he remained for six years. He became a fixture at Lincoln Center’s Mostly Mozart Festival in New York City.

He was the first wind player to be awarded the Avery Fisher Prize, and he delivered the first clarinet recital in the history of both the Hollywood Bowl and Carnegie Hall. He has performed and recorded with such classical, jazz and pop greats as Emmanual Ax, Yo-yo Ma, Canadian Brass, Judy Collins, the King’s Singers, Gary Burton, Chick Corea, Eddie Gomez, George Shearing and Mel Torme, among many others. His discography numbers nearly 40 releases, and he was a founding member of the noted ensemble Tashi, which made its debut in 1973. Stoltzman frequently performs with his son Peter John Stoltzman, a talented classical and jazz pianist and composer.

Attendees are invited to learn more about the music and gain fascinating insights about the composers with these fascinating presentations. Beginning one hour before the concert, the talks this year are presented by Glen Holcomb, a faculty member at the Flint School of Performing Arts. Holcomb is a vocal music instructor and lecturer of music history. He holds undergraduate degrees in world history, American history and music, and master’s degrees in music and American culture studies. PreConcert talks are free, and attendees receive a coupon for a free beverage at The Whiting concession stand.

Program notes by Grammy Awardwinning annotator and music critic Richard Freed are free and available in advance by calling the FIM Audience Services Office at 810-237- 3122. Individuals may also sign up to receive program notes via email in advance of every concert.