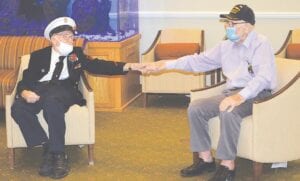 FLINT TWP. — World War II veterans Vern Wilson and Grover Good have much more in common than just their military service: they also happen to live in the same senior living complex and share the same birthdays.

Wilson, who served with the United States Army, displayed his patriotic pride by donning a WWII Army veteran cap. Good, a U.S. Navy veteran, wore his dress blues to mark the occasion.

Karen Lornec, an administrative specialist at Woodhaven Senior Community, said that Wilson and Good have become best friends at the senior living facility, bonding over their military backgrounds and doing everything together. 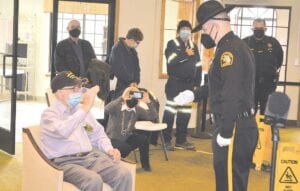 “We feel very blessed to have two of America’s finest at our residence,” Lornec said. “Vern and Grover are fine, upstanding and genuinely selfless men, and we’re so pleased that they’re here.

Wilson and Good first met a few years ago when they were assigned to sit at the same dining room table at Woodhaven. Wilson had just moved to Woodhaven after his wife passed away in 2017, while Good had already been living at the senior community for several years.

From there, Wilson and Good struck up a conversation and discovered that they were both WWII veterans, shared the same birthday (March 16) and were both born in 1921.

“All of the sudden, there was this connection (between Wilson and Good) that nobody knew about,” said Lornec. “Ever since then, they have been constant companions, always willing to help each other out with whatever they need.”

Wilson, who was originally born in Missouri, moved with his family to Flint in 1927. He attended Flint Beecher High School and later married his high school sweetheart, Ora Lee.

A few years after marrying Ora Lee, Wilson was drafted into the Army in 1944 and served as a paratrooper with the 82nd Airborne Division. While taking part in the Allied campaign in Europe, he completed 13 jumps and saw active combat in France and Germany.

After the war, Wilson worked at Bancroft Trucking in Flint for 38 years. He and his wife enjoyed 77 years of marriage and had two children. He now has 35 grandchildren and great grandchildren.

Good, a lifetime Flint resident, enlisted in the U.S. Navy before WWII broke out and rose to the rank of Chief Petty Officer. During the war, he completed numerous assignments in the Pacific aboard the USS Medusa, the Navy’s first purpose-built repair ship.

As a repairman who specialized in instrument repair, Good played a key role in helping to “patch up” American ships that had been damaged in combat. Upon returning home from active duty, he worked at the Fisher Body plant in Flint for 47 years.

Over the years, Good has shown his patriotism by taking part in 17 local parades— including the Burton Memorial Day Parade—as a grand marshal or as a military veteran participant.

Woodhaven was able to hold the birthday tribute for Wilson and Good indoors at its facility because most of its residents have been vaccinated for COVID-19.