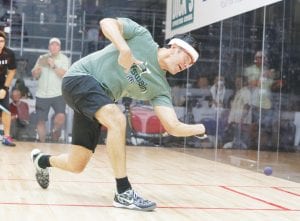 Cliff Swain, a former area resident whose father started the tournament in their native Boston, upset two Top 10 opponents on his way to the semifinals and went up 5-0 on Rocky Carson in the first game before losing to the world’s No. 2 player 11-6, 11-9, 11-3.

Carson went on to beat Rojas 11-2, 11-2, 11-8 in the final to win his second consecutive Red Swain title. The tournament is a Tier I event on the International Racquetball Tour and the fifth stop in the 2015-16 season.

Schopieray, the No. 1 player in Michigan and son of tournament director Don Schopieray, opened the event with an 11-3, 11-2, 11-2 sweep of Thomas Carter of Murrysville, Pa. He won his round-of-16 match by forfeit over No. 1-ranked and 10-time world champion Kane Waselenchuk when the Austin, Texas, player withdrew with a shoulder injury.

Swain, who lived in this area for six years and whose wife is from St. Clair, helped move the tournament here from Boston, where it had been played for 10 years. Now living in Minnesota, he also coaches Brad Schopieray.

“Highly unusual,” he said of still playing with the world’s top-ranked players at his age. “It’s a real physical game, faster moving and more explosive than tennis. A racquetball gets up to 200 mph in a 40-foot rectangle.”

The pro-am tournament included men’s, women’s, boys’ and junior singles divisions in numerous age groups, plus men’s and women’s doubles and mixed doubles. The pros played for a purse of nearly $20,000 in prize money.