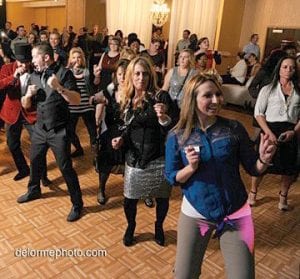 Party-goers at last year’s event had a good time dancing and partying for a purpose, which raised $60,400 to help Whaley’s children.

“A Little Party Never Killed Nobody!” is the theme for this year’s Great Gatsby-inspired party taking place from 6-10 p.m. on Thursday December 4, at the Holiday Inn Gateway Centre.

The World’s Greatest Office Party is one of three major annual events Whaley Children’s Center hosts to help fund its residential and clinical programs for abused and neglected children.

This year’s “Roaring 20s” scheme will include a 1920 Type 59 Custom Body Cadillac on display alongside a 2015 model, according to Abbey Smith, development coordinator for Whaley’s Children’s Center.

The Ballroom area will include two VIP lounges — a “Mansion” side (inspired by The Great Gatsby) and a “Speakeasy” side, she said.

The Mansion side will be very glamorous with white soft seating, chandeliers, and a ceiling treatment. The Speakeasy side will be more “private’ with a brick wall enclosure and wooden furniture.

The VIP lounges will be separated by a stage where two DJs will perform. The Atrium will be decorated with red and white flowers, ferns, gold columns and urns, feathers, and a fountain in the middle of it all,

It is designed to make guest feel like they have stepped into a Great Gatsby party, Smith said.

Lots of fun and games are in store including a silent auction and various raffles.

New this year, the Medawar Champagne Raffle – is being sponsored by Medawar Jewelers. For $20 each, guests can purchase one or more of 200 numbered champagne glasses. A drawing will take place toward the end of the evening to determine the winning number for a guest who will win a $1,000 shopping spree to Medawar Jewelers.

More than 1,000 people from Genesee and Oakland counties are expected to attend the party. Guests are encouraged to dress up in ‘20s attire but it is not required.

Admission is $75 for VIP tickets and $35 general admission. VIP tickets include access to the VIP Speakeasy Lounge for beverages and hors d’oeuvres and entry to Corporate Suites.

To purchase tickets, visit www.whaleychildren.org/ events or contact Abbey Smith at 810-600-0109 or at ASmith@WhaleyChildren.org.