For the fourth consecutive year, Jeep Wrangler has been named Best Resale Value in its class and ranked on the Top 10 list for the third year in a row.

With record setting sales numbers this year, Dodge Challenger also earned a spot on this year’s Top 10 list of vehicles with the best resale value.

“New to this year’s list is the Dodge Challenger, which heavily contributes to Dodge’s success for the 2014 model year, along with other strong vehicles from the brand.”

Ibara also said that in addition to Chrysler’s success, both Ford and GM had a number of vehicles that made KBB’s list. 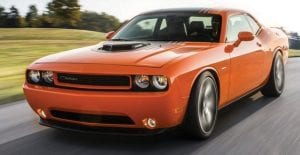 “I believe that seeing so many Big Three vehicles on our list is a continuation of a turnaround that we’ve been seeing for the past couple of years,” Ibara said. “What we’ve observed is that the vehicles that have been redesigned have improved resale value and the Detroit manufacturers have put a lot of time and money during the past few years redesigning their lineups.”

Kelley Blue Book’s KBB.com Best Resale Value Awards are based on projections from the Kelley Blue Book Official Residual Value Guide and determined by a skilled staff of automotive analysts, Ibara said. These honored vehicles are expected to maintain the greatest proportion of their original list price after five years of ownership.

GM also did well. The 2014 Impala was listed as one of the top three vehicles to keep residual value in the full-sized category. Other GM vehicles that placed high on KBB’s list included the 2014 Corvette Stingray, the 2014 Camaro and the 2014 Silverado.