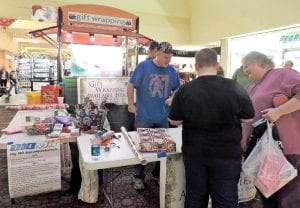 “BIG MO,” the Carman- Ainsworth Robotics Team took their first turn last Sunday at the gift-wrapping table at Genesee Valley Center mall and will be back again from 10 a.m. to 7 p.m. Sunday, Dec. 21, for a second round of wrapping for a cause. The gift-wrapping table is set up in front of Macy’s inside the mall as a fundraiser for various local non-profits group who provide the service in exchange for donations. All donations collected by this accomplished robotics team will help support its program and participation in competitions. The team won the 2014 state championship and went on to compete against teams from all over the world at the world championship competition in St. Louis. The First Robotics Competition 2015 season kicks off January 3 at Kettering University. 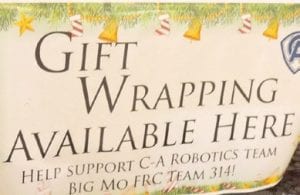