WREATHS for the FALLEN 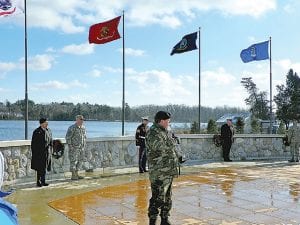 Representatives from the military presented the tribute wreath to their comrades at the Wreaths Across America event at the Great Lakes National Cemetery in Holly Township.

FLINT TWP. —Making sure no one is forgotten for Christmas is a common goal at this time of year, as various groups work to provide toys, food and other necessities in the spirit of holiday sharing .

But the volunteers of Wreaths Across America are on a mission to bestow a special gift of remembrance. Since 1992, the national organization has undertaken the task of placing fresh wreaths on veterans’ graves as a living tribute to the sacrifices they made to secure America’s freedom. Started by a Maine businessman at Arlington National Cemetery in Washington D.C., the effort has spread to some 700 sites nationwide including Great Lakes National Cemetery in Holly.

The annual wreath laying ceremony is held simultaneously on the second Saturday in December at all participating locations.

An estimated 400 people gathered this year in brisk temperatures hovering in the mid-20s at Great Lakes to lay wreaths on 3,000 of the nearly 15,000 graves at the cemetery. 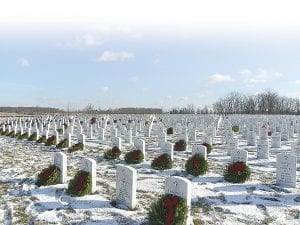 Wreaths were placed at the grave sites of veterans in the Great Lakes National Cemetery in Holly Township.

“That is the biggest thing that kills me every year, that we don’t have enough,’’ said Christina Watts of Hadley, who with her husband David and Major Chris Freytag are the site coordinators at Great Lakes.

“We have been involved since 2007 in the national Civil Air Patrol,’’ said Watts, a member of the Southfield patrol unit whose husband is the Commander of the Eastern Michigan Unit which includes Flint, Saginaw, Bay City and parts of the Thumb area.

Fundraising for the wreaths is held year-round assisted by more than 1,000 volunteers including patrol cadets, girl scouts, boy scouts, church and school groups and veterans’ organizations.

One cadet group working outside a Walmart in Monroe raised $5,000 in a weekend, Watts said, but with the average cost of $15 per wreath, the amount needed to cover 15,000 graves is nearly 50 times that.

Still, the effort has gained support as pubic awareness of their purpose spreads mainly through word of mouth, Watts said. Great Lakes opened in 2005. 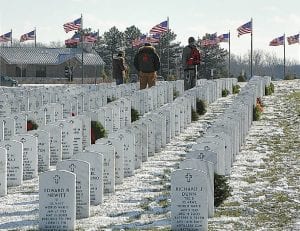 Visitors to the Great Lakes National Cemetery pay their respects to fallen comrades during the ceremony.

“We already have people contacting us who had not heard about us, who want to donate toward next year,’’ Watts said last week.

Donations and wreath purchasing is handled through the national office’s website at www.wreathsacossamerica.org where people who want to sponsor wreaths can earmark donations for Great Lakes.

This year’s wreath allotment was delivered by truck a few days before the event.

A fresh blanket of snow blended with the white headstones to create a pristine backdrop for the wreath laying which took about 15 minutes and was followed by a brief ceremony recognizing all branches of the military and POWs and MIAs. Volunteers included people who have friends or family buried at the cemetery and Civil Air Patrol units.

“We try to spread the wreaths around, doing a different section each year and trying to cover the newer graves first,” Watts said. “Our utmost ultimate goal for the program nationally and locally is that no veteran goes unrecognized.’”

Nationally, Wreaths Across America set a goal this year of placing 500,000 wreaths on veterans graves.

If the Great Lakes effort ever reaches a point of having more wreaths than needed, they will donate the surplus to Ft. Custer National Cemetery near Grand Rapids, which is much larger and a bigger challenge, Watts said

Fundraising is underway for next year when she hopes to walk out of Great Lakes on Dec. 8 having placed a wreath on the grave of very veteran buried there, she said.