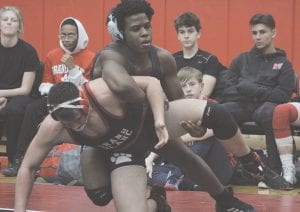 Carman-Ainsworth’s Chase Williams, shown here at 189 lbs., works for a pin against Grand Blanc on Dec. 18. Photo by Joe Oster

MONTROSE – The Carman-Ainsworth wrestling team finished with a trio of losses at the Montrose Holiday Classic Team Tournament last Friday, losing 78-6 to Alma, 72-6 to Croswell- Lexington and 57-12 to Lake Fenton.

Against Alma, Jacob Durbin (160 lbs.) was the lone Cavalier to win his match, defeating his opponent by fall. Jabril Muhammad (103), Isaiah Robinson (112), Brijesh Kumar (125) and David Mathis (189) all lost their matches by fall.

In the dual against Croswell-Lexington, Muhammad was the only Cavalier to pick up a win, defeating his opponent by fall at 5:34. Robinson, Kumar, Durbin and Mathis all lost by fall.

Against Lake Fenton, both Muhammad and Robinson won their respective matches by forfeit. Kumar and Mathis lost by fall and Durbin lost by decision.

Carman-Ainsworth will compete in the New Lothrop Hall of Fame Tournament on Saturday.