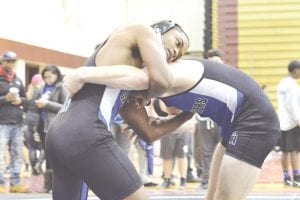 Mykah Lewis at 145, Domonique Horton at 160, Jordan Edwards at 171, Nathan Taylor at 215 and Trevon Bennett at 285 each finished fourth overall in their respective weight classes, each losing in the third-place match.

Ainsworth hosted the Div. 1 district championship last night after we went to press. The Cavs wrestled against Flushing, with the winner advancing to face the victor of Saginaw Arthur Hill-Heritage. The district champion will advance to the regionals on Feb. 14, where the winners of the Davison, Midland and Traverse City Central districts await.

The district is stacked with stateranked wrestlers from Davison, including Andrew Chambal at 103, who is ranked first overall in Div. 1. Davison’s AJ Facundo at 130, Alex Facundo at 145 and Brian Case at 152 are all ranked second overall in their respective classes. Cal Stefanko at 171 is also ranked third for Davison.

Flushing’s Ben Cushman at 189 is also ranked first in Div. 1, and Bay City Western’s Victor Schoenherr at 145 is ranked fourth.

The top four wrestlers from each class in the districts will advance to the regional championship against the winners of the Troy district on Saturday, Feb. 17 at Clarkston High School.