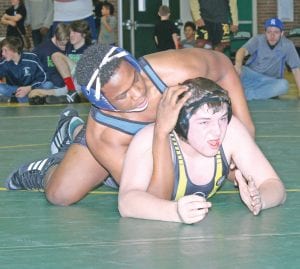 Carman-Ainsworth’s Michael Byrd works for position during the fifth-place match at the Saginaw Valley League meet at Lapeer last Saturday.

Brandon won a 6-1 decision to get into the 103-pound semifinals, where he lost a 10-3 decision to Mount Pleasant’s Darren Wilson. Brandon came back with a 12-1 major decision and pinned Bay City Central’s Preston Manhart in 1:35 for the third-place title.

Roland pinned his first opponent at 215 but lost to Lapeer’s Sam Kinne in the semifinals. He bounced back in the consolation bracket with a 57-second pin and beat Midland Dow’s Brent Booth 5-1 for third place.

Hamilton also pinned his first opponent in 1:30 at 285 but lost in the semis to Bay City Western’s Cody Witzgall. Hamilton edged Davison’s Reme Martin 4-3 in the consolation semis and pinned Mount Pleasant’s Billy Tithof in 3:26 in the third-place final.

Jacob Yost placed fourth at 112, getting a 51-second fall in the consolation semis before losing a close third-place final to Western’s Austin Hale 3-1.

Coreyonte Thomas was fourth at 145, winning three straight consolation matches after a first-round loss to get into the third-place final, where he lost a 7-5 decision to Dow’s Dustin Fletcher.

Taking fifth were Jeremy Thompson at 125, Dominique Horton at 160, Keondrece Johnson at 171 and Michael Byrd at 189.

Carman-Ainsworth wrestled Wednesday night in the Div. 1 team district at Swartz Creek. The Cavs will wrestle in the individual district Saturday at Bay City Western.