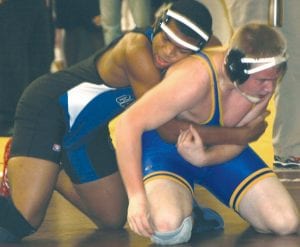 Going 4-1 and reaching the finals were Cameron Martin at 140 and Jerron Thomas at 171. Malik Dawkins was third at 112 and Lorenzo Redmond placed fourth at 152. Finishing fifth were Dward Kue at 103 and Aaron Dupree at 119.

Carman-Ainsworth was missing 119- pounder Wesley Cummings, out with an ankle injury, and 125-pounder Shaq Polacek, who was ill.

The Cavs hosted the first Big Nine competition of the season against secondranked Davison and Flushing on Wednesday and will wrestle in the Holly Tournament on Saturday.