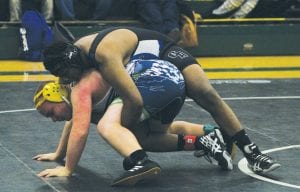 OWOSSO – A young Carman- Ainsworth wrestling team opened the season against some tough competition this past week.

The Cavaliers dropped a Saginaw Valley League dual to Lapeer 52-24 on Dec. 9 at Flint Northwestern, then fell to Owosso in a quadrangular last Saturday in Owosso.

At Owosso, the Cavs lost eight matches by fall to the Trojans but got a pin of their own from Grayden Hamilton, who pinned Tyler Grogitsky in 1:58 at heavyweight.

Two of the Cavs’ losses to the Lightning were to Div. 1 state champion Dan Perry, who pinned Hamilton in 51 seconds at heavyweight, and to state placer Devon Pingel, who pinned Matthew Durbin in 1:33 at 189 pounds.

The Cavs did beat host Northwestern in their other SVL dual, but details were not available.

Carman-Ainsworth hosted Bay City Western and Midland in another SVL triangular Wednesday night after View deadlines. The Cavs will wrestle in the County Meet this Saturday at Davison.