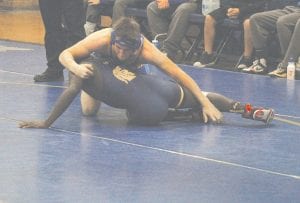 A change to the rules this season allows for wrestlers in the down position to continue competing as long as the supporting point(s) of either wrestler are in-bounds.

LAPEER COUNTY – The re-definition of the competition area to reward offensive wrestling in the down position is among the most significant rules changes taking effect with the start of 2017-18 competition in 12 winter sports for which the Michigan High School Athletic Association (MHSAA) sponsors postseason tournaments.

This change creates a larger scoring area and is intended to reduce match stoppages that take place when action moves out of bounds. Supporting points include the parts of the body touching, or within, the wrestling area that bear the wrestler’s weight, other than those parts with which the wrestler is holding the opponent.

Also in wrestling this season, twopiece uniforms are allowed as well as the traditional singlet provided the two-piece uniform follows a list of requirements and does not extend below the knee. In addition, to enhance safety, three maneuvers were made illegal including a front flip or hurdle over an opponent who is in the standing position.

A few notable rules changes in basketball and swimming & diving also will be apparent this winter:

In basketball, an official may now provide an official warning to the head coach – with that warning then recorded in the scorebook – for misconduct by the coach or other bench personnel including players in and outside the coaching box. This warning is intended to make the message clear that there is misconduct and promote a change in behavior before a technical foul is called. However, a warning is not required prior to calling a technical foul if the misconduct is determined to be major.

Divers in the Lower Peninsula will need only four regular-season wins (instead of the previous five) to qualify for the Regional Diving Qualification Meet. A diver also may qualify if he places ahead of all divers from opposing schools in varsity competition in at least four meets, even if he does not finish ahead of his teammates. This applies only in the Lower Peninsula where Regionals are conducted; Upper Peninsula divers qualify for Finals based on regular-season performance.