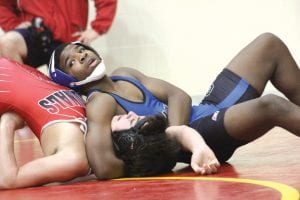 Malik Dawkins is ranked fourth in the state at 145 pounds after placing sixth at 140 in the state finals last season.

Season Overview: Dawkins is ranked fourth in the state at 145 pounds by michigangrappler.com after placing sixth in the state finals at 140 last March. Thomas is ranked fourth at 215, Keskes is seventh at 171 and Hall is ninth at 103. Weissend also has his son, 2012 state champion Jake Weissend, joining him on the coaching staff to help with a half-dozen promising freshmen.

“We have a good freshmen class and a lot of good experience coming back, so I’m really looking forward to this year,” said Tom Weissend. — D.N.