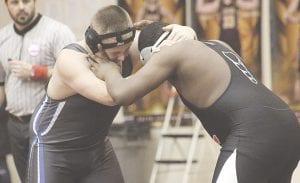 Carman-Ainsworth’s David Mathis, shown here during a match last season, returns for his senior season with the team. Photo by Joe Oster

FLINT TWP. – The Carman- Ainsworth wrestling team is looking forward to a strong showing this season thanks to a large number of both new and returning wrestlers to the program.

The Cavs welcome back seniors Trevon Bennett, a regional qualifier last season, and David Mathis, along with juniors Omar Al Hallak, Larry Brown, Jacob Petty and sophomores Jabril Muhammad, Anthony Compaore, Jacob Durbin, another regional qualifier last season, and Cedrick Thomas. Petty is returning from a knee injury and is expected to have a big year.

Carman-Ainsworth began its season last Wednesday, losing 45-34 to Bay City Western and 36-32 to Saginaw Heritage. The Cavs hosted a quad on Wednesday after we went to press and will compete in the Frankenmuth Invite this Saturday. — A.V.

The Carman-Ainsworth boys’ bowling team was 11-7 a year ago and finished in tenth place at Richfield Bowl’s regionals. As impressive as that is, the Cavs lost every bowler to graduation, including Joey Wheeler, Masen Ancira and Zachary Rhodes.

The Cavs will look to fill those shoes with Ricky Stamm III and Jordan Banks.

“This year will be a rebuilding year for us, as we will have two freshman, three sophomores and two seniors,” said Carman-Ainsworth coach Timothy Nunn.

“This years’ squad should be an interesting group of bowlers,” said girls’ coach Paul Ballard. – B.P.

The Cavaliers are back in the pool for 2019-20, but only boast 16 total swimmers on the squad. The experience will come from a pair of senior captains in Nathan Rytinski and Cameron Koegel, but the Cavs also added some depth with freshmen Jack Roy and Zion Clingman.

“Being a small team that is co-ed, our focus is on improving stroke mechanics and dropping time throughout the season,” said Carman-Ainsworth coach Abby Cowen. “We are hoping to have a great season!” — B.P.