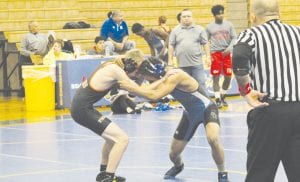 Carman-Ainsworth’s Damion Wilkes works to take his opponent down.

MONTROSE — Even though the Carman-Ainsworth varsity wrestling team was able to defeat Perry 52-18 at the six-squad Montrose Holiday Tournament last Saturday, it still ended up going just 2-2 for the event. Taking the top spot was Genesee Area Conference-Blue powerhouse New Lothrop at 5-0, Marysville went 3-1 and going 3-2 was Montrose. Perry also competed at the tourney and went 1-4 and Bendle lost all five of its duals.

Team results for the Cavaliers also includes losses to New Lothrop 63-18 and Montrose 48-36. Carman- Ainsworth takes the mat on Jan. 7 at Flint Southwestern in a Saginaw Valley League-South matchup against Powers. — M.S.