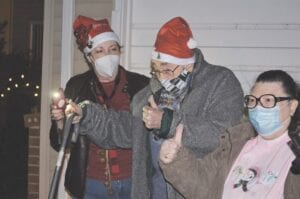 Elmer Earley, along with daughters Karen (left) and Pam (right), gave a thumbs-up to the carolers who came out to celebrate him. Photo by Ben Gagnon

FLUSHING — World War II veteran Elmer Earley got his own “Hallmark” holiday moment when dozens of Flushingites showed up on his front lawn to wish him a Merry Christmas.

On Dec. 23, Earley’s family, neighbors and friends gathered around his home to sing Christmas carols and usher in the holidays with him. Many in attendance also brought Christmas cards for Earley, and the Flushing Fire Department sent a firetruck to give him a siren-and-lights salute.

“To walk out and see all those people kind of startles you, but then you find out they’re all your neighbors,” Earley said. “I want to thank the people of Flushing for coming out to my front yard tonight.”

Karen Popovits, one of Earleys’ daughters and the former director of the Flushing Area Senior Center, said that she wanted to give her father an extra-memorable Christmas tribute this year. She and her family invited community members to gather outside Earley’s house and honor him for his military service and dedication to his hometown.

The many carolers. Photo by Ben Gagnon

“I wanted to do something special for him because he can’t get out right now, with the virus and everything,” Popovits said. “I’m grateful to live in a community where people care about one another, and that we care for our neighbors and want the best for them.”

Earley, 96, has lived in Flushing since 1970. He and his wife Jeannine raised five children in the community and were married for 61 years. Jeannine passed away in 2008.

In World War II, Earley served as a currier in the 10th Mountain Division of the United States Army and saw action in Italy. He was wounded twice during the conflict and received the Purple Heart and the Bronze Star for his decorated service and valor in the line of duty.

Earley spent much of his post-war career as a tax assessor with Genesee County’s Equalization Department until he retired in 1985.