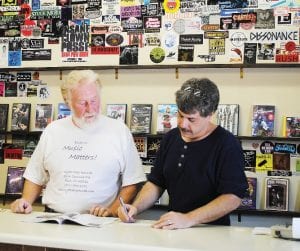 FLINT TWP.
— Since original owner Doug Earp opened Wyatt Earp Records, G-5204 Corunna Rd., on July 22, 1981, music lovers have been flocking to the store to fulfill all their musical needs.

When Earp passed away in 2004. his partner, Al Steele of Flint Township, kept the doors open for the fans and has been providing the same, quality service started by Earp. The store, which is celebrating its 30th year in business and 29 years of being open, prides itself on being a real record store, supporting all genres of music, including punk, alternative, underground, pop and real hiphop. The store’s biggest seller is “whatever is new this week. It’s like Christmas everyday in a record store,” Steele said.

“I’ve made sure to carry on and keep going,” Steele said. “Doug took me under his wing, and made me a partner. I’m one of the happiest guys around because I do want I want to do. It’s fun to work in a record store, but it’s a lot of work.” Besides getting to do what he loves, the store also has a special place in Steele’s heart.

“My wife stalked me for years here, asking me out on dates,” he said. “She came in about every other week, asking me to go out with her. We’ve been together 11 years, and we are happier each day. She’s the only one who can say that stalking paid off.”

From 1981-1987, the store was located closer to the HealthPlus of Michigan building on Corunna Road. In October of 1987, Earp moved the store to its current location. Steele, who has been a part of Wyatt Earp Records since the late 80s, said he went from being a customer to partner. “We were two music junkies, who could answer each others’ questions,” Steele said of Earp. “You only get a best friend like that once.”

When Steele became Earp’s business partner, he was told to “treat it like it was mine.” Since coming onboard at Wyatt Earp, Steele has witnessed the rise and fall of records stores. “I’ve seen 60 plus stores in 29 years that’s been opened and closed,” he said.

Over the years, Steele has fulfilled interesting requests from customers. One of the most expensive items he found for a customer was an LP that cost almost $500. “It was some old, psychedelic stuff. A Japanese band from the early 70s,” he said. “It’s great stuff. I knew about the band. In the 70s, Japanese music was expensive. It would cost $7 for vinyl in the 70s.”

Besides an eclectic collection of music, Wyatt Earp Records prides itself on customer service and ability to find what a customer is looking for.

“We give better customer service, and we have a good selection of used vinyl and CDs,” Steele said. “I’m very meticulous on the condition of CDs and vinyl. We have very competitive pricing. And, if we don’t have it, we’ll get it. It’s a question of how much you want to spend.”

In addition to the music, Steele said that the final Earp Fest will be held 7 p.m. Dec. 29 at Churchill’s Food & Spirits, 340 S. Saginaw St. Earp Fest was started as a tribute to Earp after he passed away, and is the sixth and last one. “It was never meant to be an annual event,” Steele said. There is a $5 cover to the event. There will be a raffle for Earp memorabilia, and one lucky fan will walk away with the original store sign.

“Only early birds will get the chance to win it,” Steele said.

Wyatt Earp Records is open 11 a.m.-7 p.m. Monday-Saturday, but the Saturday hours will be changing quickly to noon-5 p.m. “It’s the first change in 20 years,” he laughed. In addition Steele, the “rookie” on staff is Eric Brianard.

Steele does keep the doors open for extended hours during the holidays. In addition to vinyl, CDs and DVDs, the store carries apparel, in support of local talent and items bearing the Wyatt Earp Records logo. Wyatt Earp Records also has a digital conversion service, converting most analog media to either CD or DVD. Individuals interested in the digital conversion service need to contact the store for pricing.