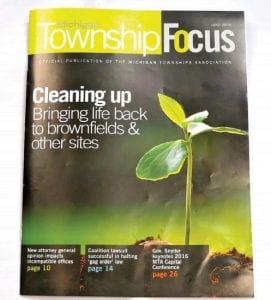 The American Youth Soccer Organization (AYSO) soccer field at 1200 Linden Road is highlighted in the article, “Cleaning up: Bringing life back to brownfields & other sites.

The article chronicles redevelopment of the former 28.42-acre Linden Road Landfill, where General Motors disposed of general waste for 38 years. After closing in 1969, the dump sat vacant until the early 1990s when an environmental rehab plan was developed by GM, the township the Michigan Department of Environmental Quality (MDEQ) and the Revitalizing Auto Communities Environmental Response (RACER) Trust, which oversees redevelopment of former GM properties.

In 1998, the property was capped with two and a half feet of soil and converted into soccer fields, according to the RACER Trust. Much of the property is currently leased to AYSO) and surrounded by residential and commercial development. 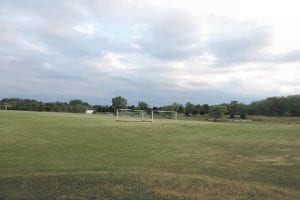 Left, the AYSO soccer field on Linden Road is featured in the June issue of Michigan Township Focus magazine.The redeveloped landfill is now a field of practice and play for AYSO soccer games from September through mid-June.

Township Supervisor Karen Miller is quoted in the article, saying, “If this project had not occurred, that property would still be contaminated and still be wasted space. It could have been an eyesore. As a result of this cooperation, it became a township asset – the township benefits, AYSO benefits and the kids who get to play there benefit.’

Miller mentioned the article during a recent board meeting and said the township maintains communication with the RACER Trust.

RACER Trust set aside about $167,500 for ongoing inspection and maintenance of this property including mowing; inspecting and maintaining the soil cover and access road; routine maintenance of the fence; and filing regular reports with MDEQ.

The site is accessible from Linden Road between Court and Calkins but probably goes unnoticed by anyone not looking for it or unaware that it exists. Most accessible to students at Carman- Ainsworth (C-A) Schools, the site serves as a nearly year-round field of dreams for regional soccer games,

AYSO teams are formed in September and play all school year. The season just wrapped up June 11.