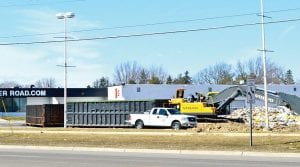 Demolition is finally underway to make way for construction of a Texas Roadhouse restaurant at 4140 Miller Road.

FLINT TWP. — Eight months have gone by since plans were announced to build a Texas Roadhouse restaurant at 4140 Miller Road.

A bulldozer arrived last week and within a few days had reduced to a pile of rubble a long-standing building at the former Miller Road car dealership. Most recently operated as Jim Waldron Used Cars from 2012-2013, the five-acre site previously was occupied by Genesee Valley Chrysler-Dodge-Jeep-Ram until 2012 and by Chinonis Chrysler Plymouth Dodge from 1970 until 1996.

Two buildings on the lot included one that was formerly used as a new car showroom and a smaller one for used car sales. The used car building on the easternmost portion of the lot has been razed but as of Tuesday the showroom building remained standing.

Developers – DA Real Estate Group of Southfield – originally said they planned to compete the retail portion by the end of 2014. A spokesperson for Texas Roadhouse has said that they were targeting a spring construction start and June 2015 opening.

Based in Louisville, Ky., Texas Roadhouse is a steakhouse known for its hand-cut steaks and Western-themed decor. The chain currently operates 430 locations in 49 states and five international locations, according to a Fact Sheet on it corporate website.

A Class C liquor license application for the restaurant received approval from the Flint Township Board of Trustees last October. The escrowed liquor license was transferred from Cardon Inc., 1902 Hammerberg Road (the Swartz Creek Golf Course) in Flint, according to the Michigan Liquor Control Commission.