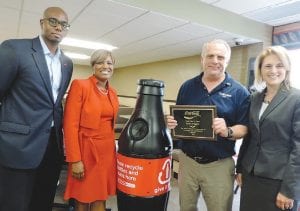 Glenn Rivers and Felicia Wasson of Coca Cola (l to r) honoree Terry Striggow and Roxanne Caine, of the McLaren Foundation display one of the new recycling bins that will be placed throughout the McLaren campus.

FLINT —Terry Striggow of Holly, a 36-year employee of McLaren Flint, is proof that a little change really “can” make a big difference.

Concerned about seeing numerous empty cans and bottles thrown away in hospital trash bins for sanitation reasons, Striggow knew there had to be a better way.

In November 2012, he sought permission to collect the empty containers and pledged to contribute the refunds to a patient care fund at McLaren.

“I think it is awful that we can’t store pop cans to take back to recycle,’’ Striggow said to Roxanne Caine, vice president of the McLaren Foundation, when he came to her office two years ago with his proposal.

Since being given the green light, Striggow has collected more than 30,000 cans and bottles adding up to more than $3,000 to benefit the hospital’s Rehab Resolve Fund, which provides equipment and other necessities for rehab patients lacking financial means. Striggow works closely with those patients, as a transporter for McLaren’s inpatient Rehabilitation Unit and its dedicated Joint and Spine Center, 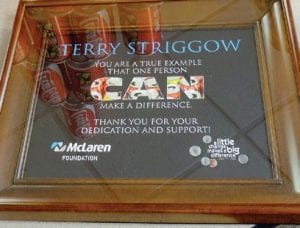 “When I see a can or bottle on the side of the road or by a trash bin, I really see 10 more cents that can help our patients,” Striggow said.

He was the guest of honor last week at an Ice Cream Social at McLaren, which also launched a new recycling partnership with Coca Cola, inspired by Striggow’s efforts.

When Striggow asked for better containers than cardboard boxes for his collection, McLaren reached out to Coca Cola, a preferred vendor of many years, said Brent Wheeler, McLaren Flint vice president of Ancillary Services.

Coca Cola responded with bottle shaped plastic bins that will be placed throughout McLaren’s Flint campus. They wlll also collect the contents and donate the refunds back to the Rehab Resolve fund.

Coke officials also were impressed by Striggow’s story and presented him with a plaque in recognition of his pioneering efforts.

Coca-Cola is an international company but firmly rooted in the community, said Felicia Wasson, director, public affairs and communication for The Coca Cola North American Group.

“For over 127 years, Coca Colas has been partnering with organizations and businesses like McLaren,’ she said. “Terry you exemplify the sprit of Coca Cola of working together to make the world a better place.”

The McLaren Foundation also gave him an award.

Lori Walters, McLaren Flint director of therapy services, described Striggow as a person who always remembers his coworkers’ birthdays and other special events.

“He is the definition of dedication,’’ she said. “He quietly goes about doing his job but at the same time is always trying to make his coworkers’ jobs easier.”

Most importantly, he also is first to lend a hand to make a difference for patients who need help, she said.