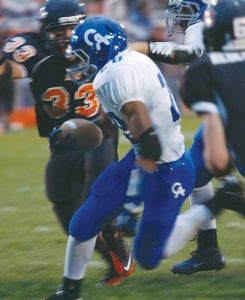 Running back Gerald Holmes is one of many Cavaliers expected to return next season.

NOVI
— Carman-Ainsworth has its sights set on next year after its football season came to a quiet close last Friday in a 25-0 non-league loss to Novi.

The Cavaliers finished this season at 3-6, but with a young team that should return most of its players for 2011.

“We only had about five or six seniors that started, and the rest were underclassmen,” said Carman- Ainsworth coach Nate Williams. “We lost a lot of seniors last year, so this was a young group.”

The Cavs jelled quickly this year after a slow start, and were competitive in several of their losses. They lost by just two points in both games against Big Nine Conference champion Davison. In their first game against Flushing, they rallied from a 21-point deficit to pull within eight points in the fourth quarter, then beat the Raiders in their rematch three weeks later.

Against Novi (5-4), the Cavs managed 209 total yards, including 143 rushing on 29 attempts. Still, they held the Wildcats scoreless in the first quarter and trailed only 8-0 at halftime. Novi started to pull away with 10 points in the third quarter and tacked on another touchdown in the fourth.

Sophomore Domenic Doak led the defense with 17 tackles. Chad Coleman had 11 plus a fumble recovery, Chris McKay had 10 tackles including a sack, and Barron also recovered a fumble.

Overton is one of the few seniors the Cavs will lose next season. He finished the season with 1,075 yards passing and five touchdowns on 66- of-133 accuracy.

Barron, a junior, and Holmes, a sophomore, both will be back. They were the Cavs’ top two rushers, with Barron totaling 534 yards and four touchdowns on 68 carries and Holmes 517 yards and six TDs on 110 rushes.

Barron, who is getting attention from several Div. I schools, including defending national champion Alabama, was the Cavs’ top receiver with 37 catches for 527 yards and four touchdowns. He also had two punt returns for touchdowns and led the team with 11 touchdowns for the year.

Defensively, Chris Thompson, Coleman and Doak led the team in tackles with 64, 63 and 62 respectively.

“We’re going in the right direction,” said Williams. “Our young people have bought in, and if we get a few more players with the attitude of these guys, we’ll do fine next year.”