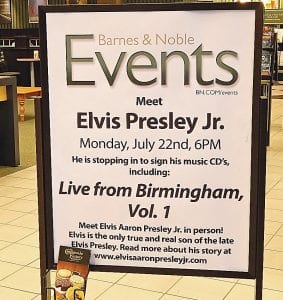 Barnes & Noble bookstore at Genesee Valley Center will be hosting an appearance by Elvis Presley Jr. on July 22.

FLINT TWP. — Elvis will soon be in the building. No, not that Elvis, but close.

A singer in his own right, Elvis Jr., is coming to town to sign copies of his latest CD, “Live from Birmingham.” He is scheduled for an appearance at the Barnes and Noble bookstore at Genesee Valley Center Mall, from 6-8 p.m., on Monday July 22, and is also scheduled to perform the next night, with Tommy Vale & The Torpedos, at the Clio Amphitheater.

“He is going to be signing his DVDs and CDs,” said Katie Hugelier, community relations manager for the Barnes & Noble, 4370 Miller Rd. “Live from Birmingham is his latest, but we have brought in some of his others as well.”

Whether all-shook-up, or just curious, Elvis fans will have a chance to meet and chat with the singer during the event, she said.

Similar to book signings at the store, Elvis Jr. will be set up in front of the store and open to the public on a firstcome, first-served basis.

Hugelier said she is not certain if Elvis Jr. will be bringing his traveling museum with him. It is set up in a custom RV and features one of the world’s largest private collections of Elvis memorabilia, including costumes, jewelry, motorcycles, and even his blue suede shoes.

It will be one of two Michigan stops for Elvis Jr. He is scheduled for an appearance earlier in the day at the B & N bookstore in Brighton, Hugelier said.

Before being approached by Elvis’ promoter, Hugelier confessed she was among the many who did not know Elvis had a son.

Here is some of the back story according to information provided on Elvis Jr.’s website at elvisaaronpresleyjr.com/index.html.

Unknown to his famous father, Elvis Jr. was born out-of-wedlock on Dec. 24, 1961, in Gary, Indiana, as a result of a liaison with Angelique Delores Pettyjohn, a young actress who was an extra in Elvis’ film “Blue Hawaii.”

Elvis’ manager, Colonel Tom Parker, feared that a marriage to Angelique, and impending fatherhood, would seriously damage the King’s reputation, so “great pressure was exerted upon the actress to have an abortion.” She refused, but agreed to a secret adoption.

Colonel Parker arranged for the infant to be adopted by a childless Yugoslavian couple known as “The Vargas,” performers who were traveling with the Ringling Brothers Circus throughout North America. They agreed not to reveal, under any circumstances, the child’s biological parents, until the boy reached his 21st birthday, and also not to seek any monetary compensation from the Presley family on behalf of the child.

Elvis Jr. began life as Phillip Stanic and grew up in the glittering circus world.

“After much inner struggle, Phillip realized that he wanted his true identity to be acknowledged,” according to his website bio. “He applied for and was granted on January 21, 1985, the legal right to bear the name Elvis Aaron Presley, Jr. by the United States Federal Court system. After sufficient documents, sworn testimonies, and additional evidence presented by independent third parties were presented to a judge, and after proof having been made to the satisfaction of the Court.”

Elvis Jr. has been singing and performing since age 16 in clubs and showcases. He has performed around the world in 18 countries and produced 21 DVDs of his performances and 34 CDs, culled from both live and studio performances.