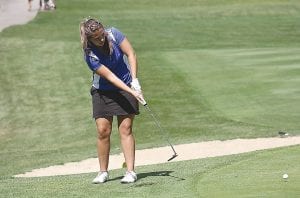 LAPEER — The Lady Cavs returned to action on Monday for the Charger Invite, hosted by Flint Powers Catholic, finishing the day with a 459. Meghan Borgerding shot a 90 to lead the team, while Alanna Gleason recorded a 112. Mikaila Garrison shot her way to a 125 and Madison Cox rounded out the scorecard with a 132.

“I’m a little bit disappointed. I was hoping for a score around 440, but it’s a tough course,” said coach Bob Blaylock. “It was tough, but it is what it is. I’m excited about the possibilities with the girls this season because they’re really young.”

The 2013 golf season got under way on Friday at Lapeer Country Club with the annual Lapeer Tune Up, where the Lady Cavaliers would finish in 13th place with a 429. South Lyon won it all at 336, Davison was third at 348 and Fenton came in third with a 367.

Borgerding led the way for Carman- Ainsworth by shooting an 84, followed by Garrison’s score of 99. Gleason finished the day with a 119, while Cox carded a 127 in the season’s first match.

The Cavaliers hosted non-league opponent Owosso following our press deadline on Wednesday and will be back to the course once again on Friday, Sept. 6 for the Genesee County Meet. — B.P.