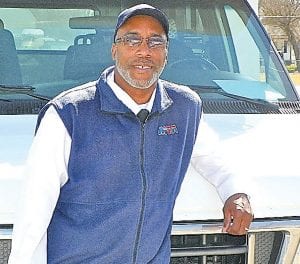 Hubert Gentry, a Your Ride driver, went beyond the call of duty to save the life of one of his regular passengers.

FLINT TWP. — An elderly diabetic woman might not be alive today if not for the exemplary actions of Your Ride van driver Hubert Gentry.

The woman, a sufferer of brittle diabetes, is one of many Gentry regularly drives to and from the Senior Citizens Center on Graham Road and to other destinations such as doctor’s visits and grocery shopping.

Gentry said he knew something was wrong when he arrived at the woman’ s Court Street home to pick her up and she did not come out immediately. His instructions are to allow riders about five minutes to lock up and come out to the van before moving on to the next person.

Familiar with the woman’s habits, Gentry noticed that her door and curtains were closed, both unusual. He tried reaching her by phone. She answered after a few rings but her speech was slurred and unintelligible. Then the line went dead.

Gentry got out of the van and knocked on her door but got no answer. He then called 911 and a township police officer and sheriff’s deputy responded quickly. Aware of previous distress calls at that address, they kicked in the door.

The found the woman slumped in a chair, still in her nightclothes, in a diabetic coma, Gentry said. He waited until they loaded her on to a stretcher before moving on to his next pick up.

The woman still is recovering, he said. She was not even aware that Gentry was her hero until he told her about it later. Tears welled in her eyes and she gave him a big hug, he said.

Paramedics told Gentry that without his efforts the woman probably would not have survived.

For going above and beyond the call of duty, board members at the senior citizens center decided to surprise Gentry with a $50 cash reward last week.

Board president Joyce Borowicz said the board figured a monetary reward would be more useful to Gentry than a plaque or a gift card.

“He’s really good with our seniors,’’ she said, adding that Gentry also recently assisted another senior who was having dizzy spells. He escorted her to her apartment and stayed with her until her son arrived.

“It’s nice to know that people like him are around,’’ she said.

Borowicz said the diabetic woman Gentry helped rescue comes to the senior center a couple of days each week.