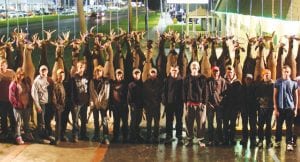 The full pole on display with the youth hunters who took part at Madden’s Lounge in Davison last Sunday.

DAVISON
— The second annual Genesee County Youth Buckpole hosted by Madden’s Lounge in Davison set a new record after 35 big bucks and eight does were on display last Sunday in honor of the state’s annual youth hunt that ran Sept. 25-26. Sponsored by the Flint Regional Chapter of Safari Club International, Madden’s and Williams Gunsight and Outfitters, prizes are handed out to each youth hunter with bigger prizes going to the first buck, largest buck and first female to bring in a buck. Word had spread so the bucks came from near and far this time around. Hunters came from all over Genesee and Lapeer counties and deer were taken from as far away as Higgins Lake.

First place went to 13-year-old Kyle Rousseau with a 202 lb, 9-point. He received a free shoulder mount compliments of Wildlife Expressions Taxidermy. Second place went to Taylor Britton, 13, who had the heaviest deer, a 209 lb, 8-pointer. She won a $200 gift certificate from Williams Gun Sight. Third place went to John Adolph, who won a cross bow from Eastman Outdoor Products, and fourth place was Nick Gilmore, of Grand Blanc, who won a $200 gift certificate from Ed’s Archery. He tagged a 9-point buck at 7:45 p.m. in Goodrich. Gilmour was said to be very happy with the 9-point after bagging a 6-point two years ago. Every entrant received a prize thanks to all the local businesses who supported the effort. — L.P. 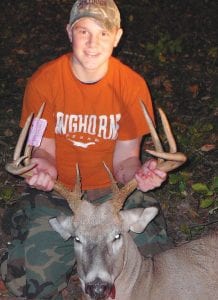 Nick Gilmore and his 9-point buck.