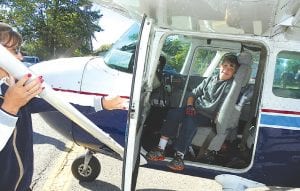 This youngster smiles shyly from the pilot’s seat of a Civil Air Patrol plane at Youth Aviation Day at Bishop Airport.

FLINT TWP. — As a boy growing up in Detroit, Charles Menard remembers his love for going to Detroit City Airport where he could walk right up to pilots and talk to them about flying.

The thrill of watching planes flying overhead bound for Selfridge Air Force Base was firmly impressed on his young mind.

Menard grew up to become a police officer in Detroit for five years and later in Flint for 27 years but the joy of flying never left him.

He passed it on to his two sons, one of whom is a commercial pilot.

Menard also hopes to kindle interest in flying careers among more young people. Too few seem to know that aviation is a viable career option for them, he said.

That’s why he started Youth Aviation Day at Bishop Airport about five years ago.

“There is nobody learning to fly,” Menard said during a Youth Aviation Day last weekend, sponsored by the Civil Air Patrol (CAP), Bishop Airport Senior Squadron. 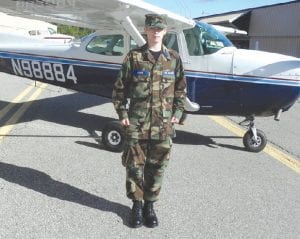 “The problem is kids seem to think aviation is beyond their reach. I want kids to know they can do this. It’s wide open.”

Light attendance at the event underscored Menard’s point of view but there were youth in attendance.

Among them was Brian Nance, 18, a cadet for about two and a half years with the Civil Air Patrol Maj. Bruce Cook Memorial Squadron, based at the Mundy Twp. fire hall No. 2.

Nance said he has not yet firmly decided on an aviation career but has flown a plane twice as part of free experiences offered young people enrolled in the CAP cadets program.

Nance is one of about 20 young people involved in the Cook cadet squadron.

Running the cadet program, offering aerospace education and proving emergency services (such as search and rescue missions) are the three purposes of the Civil Air Patrol, Nance said, adding that an estimated 550 CAP planes are the largest private fleet in the world.

The CAP started in the 1940s, a week before the Japanese bombing of Pearl Harbor, advocated by aviation buffs who wanted to volunteer their flying skills in service to their country, according to information provided on the CAP web site. President Harry Truman signed a law recognizing the CAP as a non-profit organization in 1946 and Congress enacted a law in 1948 to establish the CAP as an official auxiliary of the United States Air Force.

Lt. Linda Smith, deputy commander for the cadets squadron, attended Youth Aviation Day to help spread the word about what the program offers. She said the group meets Tuesday evenings at the fire hall and is open to young people age 12 to 18 or older if they joined before age 18. It is open to young people from all over Genesee

County and in fact draws some members from outside of the county, she said.

But one of the program highlights is the five free flight lessons, with the cadet helping to fly the

CAP plane. They are not allowed to take off or land but get to help co-pilot the plane, Lt. Smith said.

They also get five free flights in a glider plane. The cadets learn flight basics based on a syllabus.

The flight experience is invaluable, said Menard, of his lifelong hobby.

Young people interested in flying careers need to start early and be dedicated to it, he said, adding that the pay is very good.

Menard, who bought his first plane in 1965, displayed two of the five he now owns during Youth Aviation Day.

About 10 planes total were displayed for young people attending the event to climb aboard and ask questions of the pilot just as Menard used to do as a boy at Detroit City Airport all those years ago.

For more information about the CAP cadet program including how to join, visit the web site at gocivilairpatrol.com.