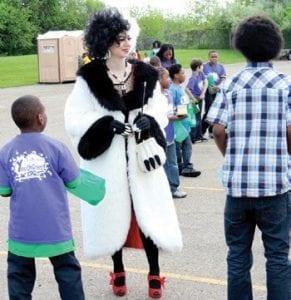 Above, a YouthQuest leader dressed as Cruella de Vil was one of many Disney characters featured from Snow White to Mary Poppins and many other children’s favorites. Left, the annual ArtQuest exhibit was displayed inside in the church gymnasium.

YouthQuest is a free after school educational program for K-12 for students from Flint Community Schools, Carman- Ainsworth Schools and the International Academy of Flint.

“Our students have worked hard all year long, and this event is a wonderfully creative way to reward their efforts,” said Rhetta Hunyady, Vice President of Education & Training for the Flint & Genesee Chamber, which administers the YouthQuest program. “We have had a banner year in terms of strong daily attendance,” said Hunyady who was dressed as Mary Poppins in keeping with the Magical Kingdom theme.

Other adults dressed as Disney movie characters included Mickey and Minnie Mouse, the Madhatter from “Alice in Wonderland” and Cruella de Vil from “The 101 Dalmatians.” 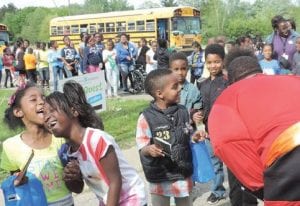 Randels Elementary students are greeted by Disney characters as they prepare to enter the Magical Kingdom at the YouthQuest year-end event.

Hunyady pointed out that about 30 painted banners depicting Disney children’s movies, displayed in the main tent, were created by students from various schools. Dye students, for example, were assigned Monsters Inc.

“Nature” was a learning theme for the year and supported by event activities including a bullfrog “kissing” booth presented by For-Mar Nature Preserve & Arboretum.

This year’s event was combined with ArtQuest, an annual exhibition featuring 2,000 pieces of artwork created by YouthQuest students. The indoor display also included educational exhibits including how a tornado forms, entomology, vegetable printing and determining the age of a tree. 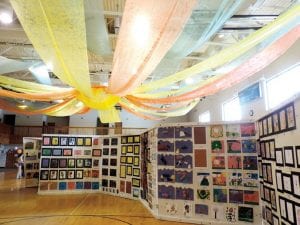 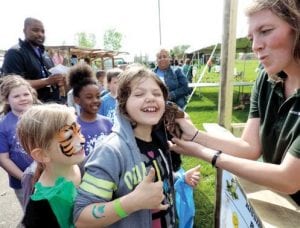 At For-mar’s ‘frog kissing” booths, students had the choice of receiving a kiss from the amphibian or allowing it to dance on their palm.