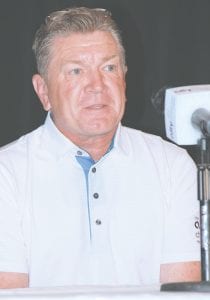 At Tuesday’s press conference, last year’s Ally Challenge champion Paul Broadhurst said, “This tournament and (Warwick Hills) are one of the best, and certainly one of my favorites,” and that he’s looking forward to defending his title as last year’s victor.

“We have a power-packed week in store for the community,” said Coffman. “We’ll have one of the best lineups of golfers of the entire year, and we’ve gotten several whispers from some names that everyone will recognize that are telling us that they’ll be playing, too. We’re 26 days out as of today, and we’ll be announcing more golfers as we approach the tournament.

“This tournament and (Warwick Hills) are one of the best, and certainly one of my favorites,” said Broadhurst, who will return to defend his title in this year’s event. “Most of these guys played in the Buick Open, and I know we all look forward to coming back this year.”

The Celebrity Shootout will take place on Saturday, Sept. 14, following the last tournament pairing of round two and beginning on Hole No. 10 at Warwick Hills Golf & Country Club.

“We’ve really taken this tournament to the next level in year two and can’t wait to welcome everyone to Warwick Hills next month,” said Andrea Brimmer, the chief marketing and public relations officer for Ally. “Adding Red Wings legend Henrik Zetterberg to the Celebrity Foursome was the final piece of what will be an amazing day on tournament Saturday.”

“I’m thrilled to join the lineup for the Celebrity Shootout and look forward to raising money for two great causes while having some fun on the beautiful Warwick Hills course,” Zetterberg said. “Having the opportunity to play alongside Jack Nicklaus, one of the true legends of golf, is incredibly exciting and I hope to pick up a few tips to improve my game along the way.”

The pairings for this marquee competition will feature Nicklaus and Kid Rock verses Bentley and Zetterberg in a nine-hole team scramble, match-play format. The teams will compete for a $25,000 purse to benefit the tournament’s primary charitable partners, Genesee County Habitat for Humanity and United Way of Genesee County. A blind draw will be conducted the day of the Shootout to determine which charity will be assigned to which team. Each hole will be given a dollar value that will be awarded to the winning team’s charity per hole.

“The pairings and format for the Celebrity Shootout will make for an incredibly unique and exciting Saturday at The Ally Challenge presented by McLaren,” said Coffman. “Fans are sure to see a thrilling competition as Nicklaus and Kid Rock take on Bentley and Zetterberg and battle for bragging rights, and most importantly raise money for the tournament’s primary beneficiaries.”

In related news, the tournament also announced the Celebrity Shootout Auction. This new program, featuring exclusive experiences, including the opportunity to caddie for the celebrities, is now open to the public by visiting www.theallychallenge.com. All proceeds from the Celebrity Shootout Auction will benefit charities associated with the tournament.

The Ally Challenge presented by McLaren, September 9-15, will be one of the premier Regular Season events on PGA TOUR Champions in 2019 and all three rounds of the tournament will be broadcast on Golf Channel.

For more information about The Ally Challenge presented by McLaren, please visit www.theallychallenge.com. For the latest Ally Challenge news and updates on social media, follow the tournament on Twitter and Instagram at @ AllyChallenge and on Facebook at Facebook.com/AllyChallenge.