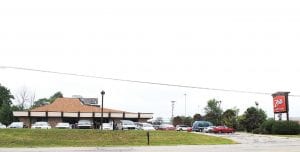 SWARTZ CREEK
— Teresa Alexander is seeing some familiar faces at her new place. Alexander and her husband, Bill, recently opened Zoie’s Chophouse, 6104 Miller Rd. For the Flushing resident, the restaurant business is nothing knew. Alexander has been in the business for 21 years, including owning Gabby’s Cafe in Flushing for 11 years.

When she was forced out of her building in Flushing, Alexander began searching for a new location and found exactly what she wanted in the building

that previously housed O’Tooles and My Family Restaurant.

“It’s exactly what I wanted,” she said.

Named for her only granddaughter, Zoie’s Chophouse seats approximately 210 people and dishes up classic, American fare. An item menu that is a big favorite with customers is the variety of homemade pies, and the restaurant’s coconut cream pie is the top pick. Customers also enjoy many of the dishes that were served at Gabby’s. Zoie’s Chophouse serves breakfast, lunch and dinner and all dishes are made by Chef Steve Madden, who previously worked at Redwood Lodge and Mango’s. Alexander said the restaurant specializes in family dining during the day but at night, Zoie’s lives up to its name as a chophouse by offering steaks to fit any size appetite.

The most popular steak on the menu is the 16-ounce Cowboy Steak. “Two people can eat it,” Alexander said. When someone orders a steak, they get all the trimmings at no extra charge, such as salad and bread. Zoie’s Chophouse also offers daily specials and $20 for two deals. For those who crave a hearty brunch, the restaurant features a Sunday buffet that runs from 11 a.m.-3 p.m.

But the dishes are not the only things noticed by customers who previously ate at Gabby’s. Some of the decorations adorning the walls grab customers’ attention.

“They come in and see the puzzles and recognize us,” Alexander said of the various puzzles on the wall, which include a Cracker Jack, Harley Davidson and Gone With The
Wind
puzzle. “We had the puzzles at Gabby’s, and a lot of people remember them when they come in here. We’ve gotten a good reception.”

Besides the wall decor, customers who frequented Gabby’s and now come to Zoie’s will see familiar faces working in the restaurant, which employs 20. “A lot of employees followed me here to Zoie’s,” Alexander said.