GRAND BLANC TWP.—Genesee County 911 Deputy Director Tim Jones has been tabbed as the interim director for 911 Central Dispatch. On Sept. 14, the Genesee County 911 Consortium Board approved a 90-day contract for Jones to take over operations at the 911 Dispatch Center, following the resignation of embattled former 911 Director Spring Tremaine. Although Jones initially turned in a […]

GENESEE COUNTY – The Genesee County Health Department (GCHD) has updated the initial mask order it released Aug. 12, to include pre-Kindergarten and grades seven 7-12. This order adding pre-Kindergarten and grades 7-12 is effective Sept. 7. The order will remain in effect until community transmission for Genesee County is categorized as “Moderate” by the Centers for Disease Control and […] 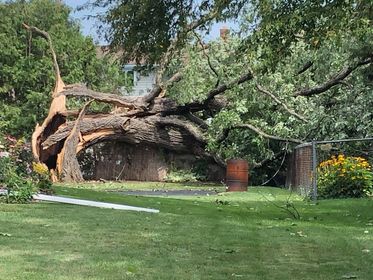 Storms leave many without power, trees down

GENESEE COUNTY – Powerful storms ripped through the county yesterday, knocking down trees and downing power lines throughout the area. According to the National Weather Service, the storms came through Genesee County around 3 p.m. moving northeast leaving a trail of broken limbs, trees and powerlines in its wake. About 12,000 Consumers Energy customers lost power on the south side of […]

FLINT – The Genesee County Health Department (GCHD) has been notified of two Genesee County residents whose additional testing at the Michigan Department of Health and Human Services Bureau of Laboratories was positive for the Delta (B.1.617.2) variant of COVID-19. Case investigation and contact tracing has been done for both patients, one who first tested positive on July 6 and […]