FLINT TWP. — A 62-year-old Flint Township man was fatally injured early last Thursday morning while riding a bicycle on Beecher Road. About 3:51 a.m., on Jan. 24, Flint Township Police responded to a call about a motor vehicle accident involving the bicycle and an SUV on Beecher Road, west of Linden Road. The bicyclist was fatally injured. He has […] 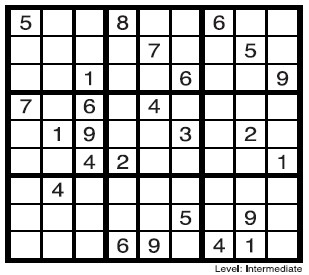 
Fill in the grid so that every row, every column and every 3×3 box contains the digits 1 through 9. You can’t change the digits already provided in the grid. Every puzzle has just one correct solution.