Egg hunt and other upcoming church events FLINT TWP. — Orpheus Choir of Olivet Nazarene University will perform in concert at 7 p.m., Friday, March 31 at the Central Church of the Nazarene, 1261 W. Bristol Road. Now in its eighth decade of annual performances, the choir represents Olivet Nazarene University at regional concerts in Illinois, Indiana, Michigan and Wisconsin. […] 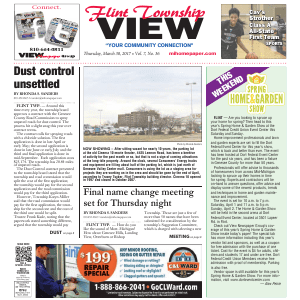 Letters to the editor


I, as well as many other Flint Township citizens, am concerned about the amount of litter that is on our streets and highways. The snow has melted and we look like a third world country here. I have lived in seven foreign countries. I am embarrassed with our area when we have foreign visitor friends. The poor mentality of our […]